VOXEL-MAN 3D Navigator Brain and Skull is a very useful introduction to the morphology, functional anatomy, and blood supply of the brain. The integrated approach and 3D interactive format are user-friendly and highly suitable for the target audience. — Jacqueline Graham and Paul D. Griffiths, Neuroradiology (more reviews)

VOXEL-MAN 3D Navigator: Brain and Skull is an new kind of anatomical and radiological atlas. It is novel in at least two respects: 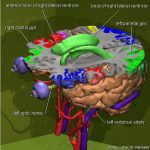 VOXEL-MAN 3D Navigator: Brain and Skull is based on various virtual body models, created from cross-sectional images from computed tomography (CT) and magnetic resonance imaging (MRI). In addition, images from the Visible Human were used. It contains more than 250 three-dimensional anatomical objects, including functional areas, vessels, and blood supply areas. 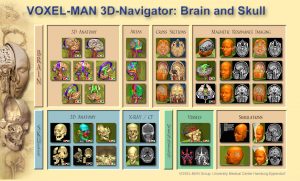 The anatomy is presented in 36 interactive scenes that are accessed from a visual table of contents and can be explored and dissected in various ways. The interactive scenes cover a variety of topics such as subdivision of the cerebral cortex, transverse MRI cross-sections, exploded view of the skull, and blood vessels of the head. 18 of the scenes are also available in stereoscopic (red/green) format. 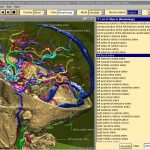 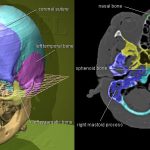 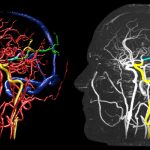 The radiological manifestation of the objects can be viewed in the context of 3D anatomy. This includes simulated X-ray images, as well as maximum intensity projections and cross-sectional images from CT and MRI. 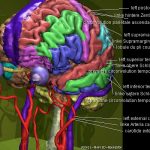 VOXEL-MAN 3D Navigator: Brain and Skull is a multilingual system: The anatomical nomenclature is available in Latin, English, French, German, and Japanese (French and Japanese only for the brain without vascular system). For English, German and Japanese Windows systems, the user interface automatically adapts to the respective language. A manual is available in English and German. 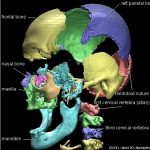 The program provides unique reference material not only for medical students, but also for professionals in all medical disciplines involving anatomy and radiology of the head. Even laypersons can get fascinating insights.

Back to VOXEL-MAN 3D Navigators