The VOXEL-MAN 3D Navigators are a family of interactive atlases of anatomy and radiology for Windows PCs. The following 3D Navigators were published: 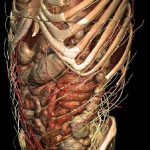 Other applications of this technology include the Virtual Mummy and the multimedia training system EUS meets VOXEL-MAN.

Until well into the 2000s, interactive visualization of medical 3D models was only possible on high end workstations. This applied in particular to high resolution voxel models, such as those derived from the Visible Human.

To overcome these limitations, a new paradigm based on pre-calculated interactive scenes of the model was developed. As the base technology, the QuickTime VR format was chosen. In contrast to a linear film, a two-dimensional matrix of images is available, so that the scene can be created and explored with two degrees of freedom. As an essential innovation, all images of the scene were extended by a pixelwise link to an anatomical knowledge base, which can be queried in the image context by simply clicking on it.

To create a scene, the two degrees of freedom can be freely chosen, for example

A user can explore a scene largely with the functionality of a full visualization system, but in real time and with a much easier handling on any standard PC.