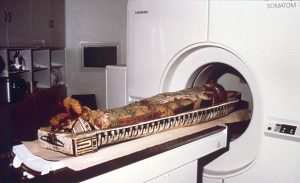 What looks like magic* is achieved by the following procedure: A computer tomograph (CT scanner) is used to generate a series of successive cross-sectional images of the mummy using X-rays. This series is stored in a computer as a 3D image volume. 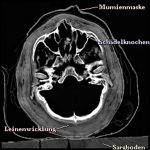 From this image volume, perspective views of the hidden anatomy can be extracted, like it is demonstrated with the mummy’s head. It can be viewed from arbitrary directions, and its components like the linen cover can be removed and restored. The unwrapping on screen, therefore, is non-destructive. Since the CT scans have been generated with an x-ray technique, the original colors have naturally been lost. The colors you see on screen are artificial. In addition, a frontal photograph of the mummy was projected onto the outer surface using texture mapping.

On the other hand, the mummy is “intelligent”: With the procedure developed in Hamburg, information about objects can be saved in a way which makes it possible to access them in context on screen. For example, an observer can click on a certain part of the image to obtain information about the chosen area. This function, though, is only available in the exhibition and not yet on the web.

The method described is very complex in development and execution. Ten million volume elements have to be processed to create a new image. For a user not to have to wait to long, a very potent computer is needed (a UNIX workstation of higher performance). The program used in the exhibition is, therefore, a simplified version, where ready-made image sequences can be called by the the user. This version is also used for the VOXEL-MAN 3D-Navigator interactive atlases of anatomy and radiology.

The computer tomographical recordings have kindly been made by the Radiological Clinic of the University Hospital Eppendorf.