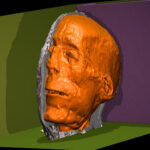 The Egyptian mummy of Chonsu-maa-cheru dates from the time of Pharaoh Osorkon I (ca. 925-890 BC). In 1903, it was donated to the Museum of Ethnology in Hamburg, today’s Museum at the Rothenbaum – Cultures and Arts of the World (MARKK).

Fortunately, the mummy was not unwrapped, as it was often practiced at that time. Instead, it became one of the first mummies to be examined with X-rays, which had been discovered only a few years earlier. Already then, a scarab was discovered on the chest of the deceased. 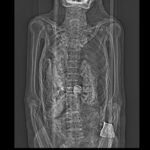 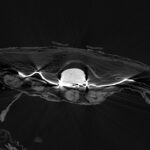 In 1996, cross-sectional images of the entire mummy were created using computed tomography (CT). A CT scout view (left) illustrates the approximate position and size of the scarab. On a CT scan (right), the winged scarab is clearly visible as a bright, i.e. very dense object between linen bandages and thorax.

The views of the winged scarab shown here were reconstructed from a sequence of CT images. The body is made of stone (possibly lapis lazuli), the wings of thin sheet metal. Since we have no information about their natural colors, the colors used for these renderings were selected according to artistic aspects. 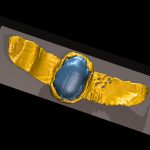 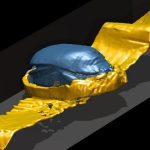 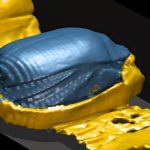 The scarab still rests inside the mummy of Chonsu-maa-cheru, as it has for 2900 years.

See also head and body of other mummies