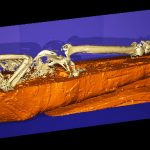 The Secret of the Mummies – Eternal Life at the Nile*

In the Shadow of the Pharao*

The Mummy of Ta-di-Isis: A Journey from the Nile to the Rhine*

* Exhibitions of the Virtual Mummy with full functionality (interactive scenes which allow to investigate the constituents of a picture, to paint them, or to look up structures)